Tallahassee, Florida (CNN)Sandy Halperin closes his eyes. His expression is pensive, his mouth slightly upturned. Memories, like glints of light, dance inside his mind — a kind of neural film strip.

It is 1962. He is in a small neighborhood pharmacy in Springfield, Massachusetts. His father, the pharmacist, hands a customer a wooden nickel, good for a free cup of coffee while she waits. He sees his 12-year-old self standing over a towering hot fudge sundae at the soda counter. The smell of warming cashews and peanuts curls out of a corner machine. 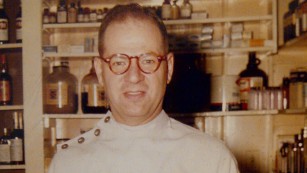 Sandy Halperin’s father, Leon, standing in his pharmacy. Leon died of Alzheimer’s in 1998.

Then, as the mind is wont to do, Sandy’s memory leaps to a different time. He is 8 years old, standing next to his father behind the counter. His fingertips are flecked with white as he fills empty capsules with medication, clasping them together before handing them off to his father.

Sandy slowly sighs. His eyes flutter open as the reverie ends. Whatever soundtrack his mind generated to accompany memories of his father’s pharmacy dies out, replaced by the din of Florida cicadas.

“Those days with my father influenced my life forever,” he says, before his voice trails off. “I remember it. I can shut my eyes and see it, yet I won’t remember the movie I saw last night.”

Alexander “Sandy” Halperin sits on a bench, surrounded by gnarled oak trees, at the retirement village in Tallahassee where he lives with his wife, Gail. His face is framed by a trimmed, graying beard; the rest of it is smooth — almost too smooth for a man about to turn 66.

He has an engaging manner of speaking. He looks you in the eye intently, at times waving his hands to make a point, or lightly touching your arm. His voice rises with the passion of his persuasion. He tells a well-timed joke, and laughs joyfully with you. 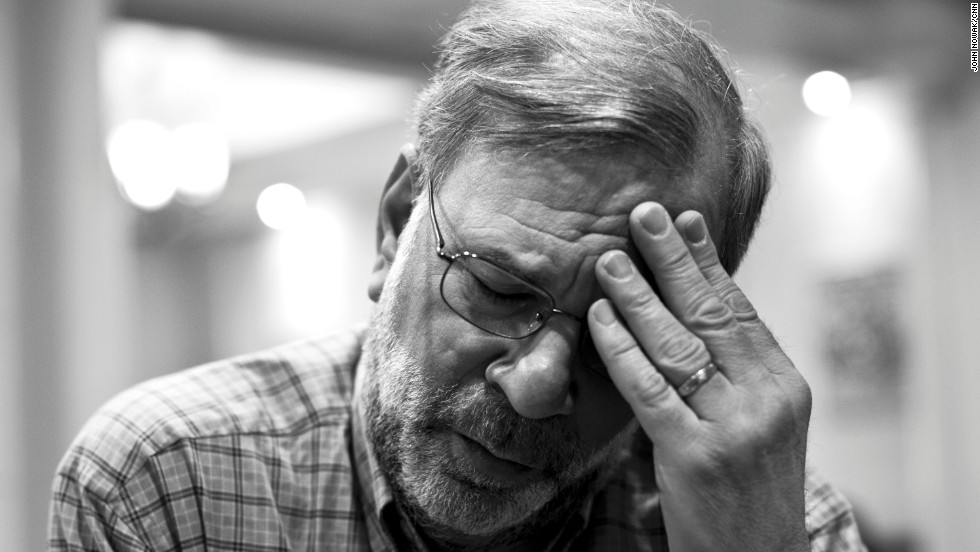 “All we really are is our thoughts,” Sandy Halperin says.

If you were not paying close attention, you might never know Sandy Halperin has dementia. Doctors diagnosed him with early onset Alzheimer’s in 2010, but he traces his first symptoms back to 2008.

“He was always a very inventive and creative person; he always has a lot going on, always able to juggle a million things,” says Lauren Halperin, 33, his younger daughter.

For years, the former dentist and assistant professor at Harvard relied on his wit and intellect, what neurologists call his considerable “cognitive reserve.” But lately, that inventiveness is withering. He punctuates most thoughts with an apologetic “I forgot what I was saying,” or a more frank, “I lost it…” 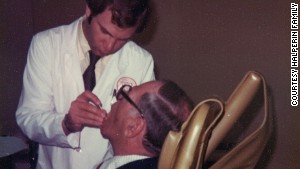 Sandy Halperin was a teacher and practicing prosthodontist at Harvard University in 1979.

When he tries to follow a conversation’s twists and turns — or recall the minutiae that form a productive day — the mantras of “I forgot..where was I?” and “Where did I leave off…?” and “Remind me again…” can seem relentless.

Call them conversational hiccups. Except these hiccups aren’t abating — they will only get worse.

“I see a lot more frenzy and desperation in his communications with people now,” says Karen Halperin Cyphers, 35, Sandy’s older daughter. She compares it to what her daughter Madeline did as a 3-year-old when she was asked to take something to the trash.

At times, the memory loss is painful, Sandy says.

“All we really are is our thoughts and our brain,” he says. “So this is a different kind of pain. It’s not a physical pain, the pain is emotional.”

Scope of the disease

Around the globe, more than 46 million people are living with Alzheimer’s and other types of dementia, says the 2015 World Alzheimer’s Report. That number is expected to rise to 131.5 million by 2050. More than 5 million people reside in the United States, but only half are formally diagnosed.

Losing the ability to think and recall — what could be defined as the very essence of being human — is almost universally terrifying. So terrifying that many people dwell for years in a state of denial. In fact, according to a survey by the Marist Institute for Public Opinion, an Alzheimer’s diagnosis stirs more fear than any other major life-threatening disease — even cancer or stroke.

Denial, it would seem, shrouds the mind from dementia’s more appalling images: patients shuffling aimlessly around a nursing home in wheelchairs, despondent. Or the converse image of the agitated patient thrashing wildly with no concept of where — or even who — they are.

Sandy bristles at those images of Alzheimer’s. While they may capture what the disease looks like during later stages, he says they ignore what could be many productive years during the early and middle stages.

In those years, he says, it is possible to live vitally, despite deficits. He believes he is doing just that.

As best as he can, Sandy remains active and social — dining with other residents at his retirement village and taking twilight walks and pre-dawn swims to try and delay, at least for a while, the symptoms of his disease.

He also became a fervent activist — giving talks about stigma, lobbying Congress — and has a Linkedin network of Alzheimer’s patients, advocates and physicians numbering nearly 10,000.

“My focus is to help break the thinking that the patient that has Alzheimer’s is sitting in a nursing home,” he says, the passion building in his voice.

“I’m alive. I can still be proactive.” 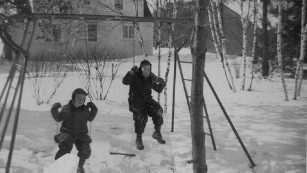 In Sandy’s mind, it is 1956. He is 6 years old. Snow blankets the ground outside. He is curled up on the couch, hugging his legs as his infected lungs spasm. He can hear the faint sound of his brothers gleefully screaming during a spirited snow fight with other neighborhood children.

The door flings open. His two older brothers drop a bin filled with snow on the kitchen table. Sandy can almost feel the cold grip his fingers now as he relates how — unable to withstand the weather outside — he often made snowballs from inside the house.

“I was coughing away and sick, so to make me feel good my brothers would bring in the snow,” he says. “I would make the snowballs and put them in the freezer so that they’d be ready for their war, their snowball fight with their friends.”

Memories, many from long ago, have become a type of cognitive balm, thoughts to which he clings, tightly, since his diagnosis. He finds comfort in old memories because they are still available to him, often triggered by favorite songs and old photographs.

More elusive the past few years: The movie he watched last night; the product he drove to get at the grocery store; or worse, where he put the car he needs to get to the store in the first place.

“My biggest problem is my short-term memory,” he says. “It’s my ability to recall what I said, what I did, what I need to do, and that’s steady through a day.” 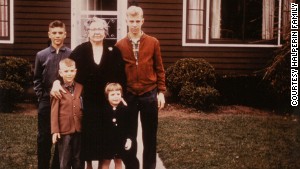 Sandy realized he had progressed from garden-variety memory loss — losing keys, forgetting a name — to something far worse about eight years ago when he was working at the Florida Department of Health.

His job was to review dental cases for attorneys and consider the merits of patient complaints before the department. He would be handed case files, sometimes hundreds of pages long, and would issue a written or verbal report. His recollection of even the tiniest detail contained in any case he was reviewing was impeccable.

Then one day it happened: His memory of a case vanished.

“I am looking at (the case file) for an hour and a half,” he recalls. “I’m reading it, it’s in my brain. Then I would close the file and not remember literally anything about the case.”

As it started to happen more and more frequently, Sandy struggled to cope. When an attorney would come to his office to discuss a case, he would make an excuse to meet a few minutes later. Almost as soon as the attorney left his office, he would desperately try to cram the details into his brain.

He would then run to his colleague’s office to try and relate the information before it escaped him again. That desperate scramble worked — for a time — until it became exhausting.

“I would be dizzy and could hardly sit there and concentrate,” he says of those meetings. “But I was able to get through the conversation, trying to get out of there as soon as I could.”

It is the only time in his life, he says, that he hid his symptoms.

When it became too much to bear, Sandy sought help. After a series of misdiagnoses, he was finally told he had early onset Alzheimer’s disease.

“It is a horrifying, gripping, devastating disease that plays havoc on the family and on the patient,” says Gail Halperin, Sandy’s wife. But, she adds, what has softened the blow is the way Sandy responded to it.

“He immediately came out and said, ‘I don’t want to cover this up. I want to share it with people and be proactive,'” she says.

But data from the CDC suggest that such a response is rare: Nearly 13% of Americans reported experiencing worsening confusion or memory loss after age 60, but most — 81% — had not consulted with a health care provider about their cognitive issues. 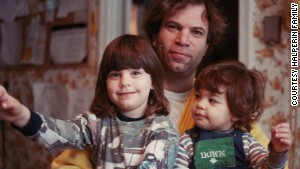 “For some reason, it’s embarrassing to people that they have this (disease), and it doesn’t make sense,” says Lauren Halperin, adding that some ignore their symptoms, waiting until the last possible moment to seek medical help.

There is no cure for Alzheimer’s disease, but certain medication combinations — and lifestyle interventions — may help with symptoms associated with dementia.

“By the time they go on medication, not to say it’s too late, but they’ve lost some potentially valuable time,” she says. “And I think (my dad) feels like, ‘enough of that.’

“If this is something you have, don’t be ashamed of it. Go do something so that you can have more time.'”

Living in the ‘precious’ present

Four years after being diagnosed with Alzheimer’s disease, Sandy says the flickering lights of times past still cast a glow in his mind.

Some days, the glow is barely perceptible. Other days, it burns bright. What he is learning, he says, is to let whatever state his memory is in during a particular day — be.

He often quotes a book, “The Precious Present,” by Dr. Spencer Johnson, a contemplation of what it might mean to live in the moment.

One of the book’s more poignant passages, says Sandy, describes how he is attempting to live with Alzheimer’s: “It is wise for me to think about the past and to learn from it, but it is not wise for me to be in the past, for that is how I lose myself.” 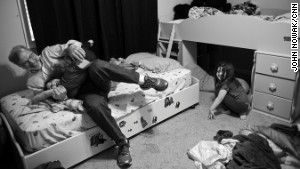 It is a towering sentiment — one that he tries in earnest to embody. It’s made even more meaningful now that Sandy is noticing not just his short-term memory flagging, but also his long-term.

The gravity of that loss breeds wonder. Will his granddaughters remember him when they get older? Has he taught them enough about what it means to be a Halperin? Will they absorb enough of the spirit of giving and joy he got from his family while growing up?

“I want them to feel what it’s like to have a grandpa,” he says wistfully.

Almost as soon as he says it, Sandy engages in the sort of mental tug-of-war he will likely play for the rest of his life: He stops himself from thinking about what might be, and thinks about now.

“The other day I had a joyful moment with my granddaughter Rebecca,” he said. “I was tickling her and she said something to the effect of ‘Grandpa, that was a great tickle.’

Soon, it may be all Sandy Halperin has.

And that is OK.

by Sandee LaMotte and Stephanie Smith

Bryan Kane and Oliver Janney contributed to this story.